So I glued about 1/2 the wood strips to the balsa wood, and as it was drying I noticed it was starting to curl up – so I covered it with plastic wrap (I’ve had trouble with paper sticking to the glue that seeps out when wood is drying, only to have solidly glued on paper on my finished product), That seemed to work, so I proceeded to glue the remaining half. Weighed that down overnite to dry so it would be flat for the next day so I could glue it to the kitchen ceiling. In the morning, I realized I had to drill the holes for the chandeliers before I mounted the ceiling. I knew I needed one light in the heart of the kitchen, then decided I would also put a chandelier over the dining table, which will run half in the kitchen and half in the sunroom – so I drilled a hole for that one, too. I can run 3 lights on one switch, or opt to get a 6 light switch. But then I thought that it would be nice to be able to turn on some light in the house without everything coming on at the same time, so I’ll run two – 3 light switches. Six chandeliers should be just about right. You can also purchase individual battery operated sconces, lanterns, ceiling, and table lights.

Okay, so, before I install the ceiling (which is still warped by the way, just to make things difficult), I needed to finish the walls of the kitchen first. So, I put fake bead board wainscoting (corrugated cardboard) on the bottoms of the 2 walls, trimmed it out, and painted the top of the window wall Scallion green from Martha Stewart’s line of craft paint. Painted the wainscoting white (wiil finish that on the stove wall). The top of the stove wall (it’s only 4 inches because I cutout the rest of the wall to create the sunroom) is the checked wallpaper, which also goes on the 15 pane window wall in the sunroom. That leaves the screen door wall, which I will paint white. 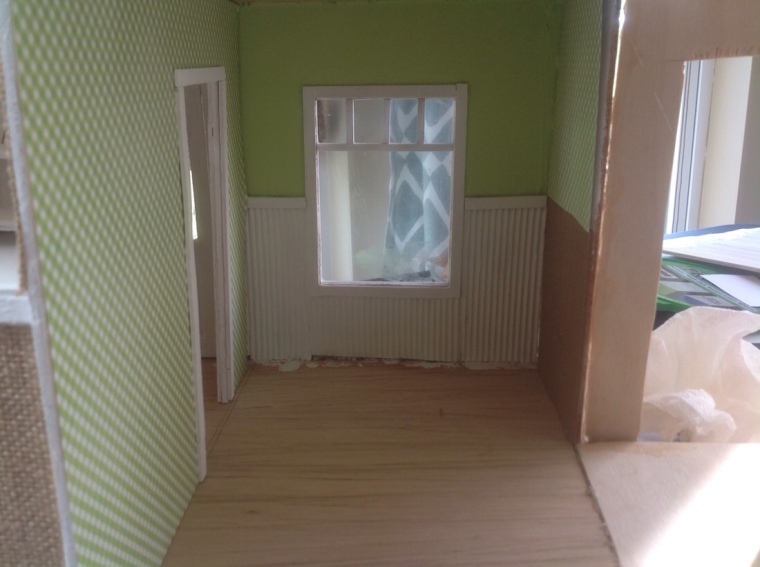 When the walls are done, I can install the kitchen ceiling and the floor. Instead of popsicle sticks (for the floor), which will be throughout the rest of the house except for the bathroom, I bought a vinyl stick on 12×12 square in a brown that mimics the look of stone. My heart kept wanting to make it a wooden floor too, but my head wants to try something different. I think I’ll like it in the end. This floor can be built on a base of thin cardboard or balsa, too, so that if I ever want to change it out, it will be easier to remove – and, it will be easier to glue down. If I place them the tiniest space apart, it might mimic the look of real stone more than if I just threw the scored slab down. Decisions, decisions. This build is full of decisions.

I also glued the 3 pieces of the bay window together for the far wall in the salon, but realized when I went to install it that it wouldn’t fit – the angles of the side windows do not allow for attachment to the house, so today I will pry them off the main window and perform a redo. 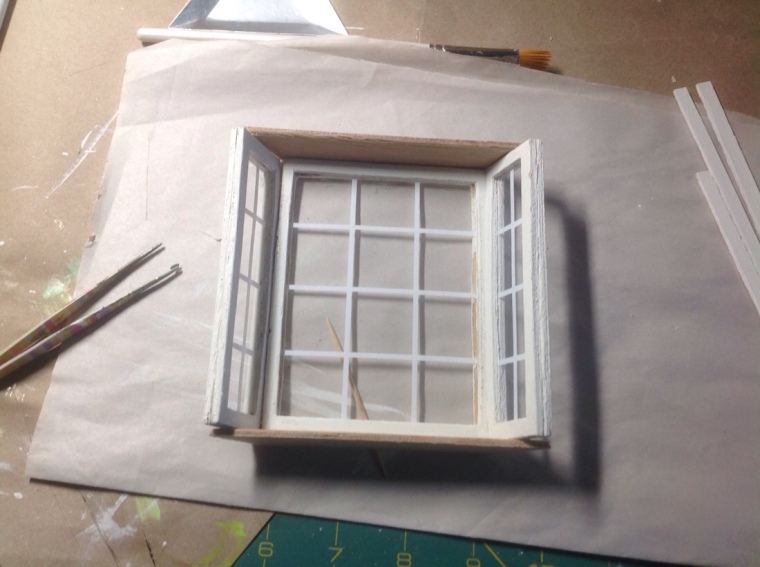 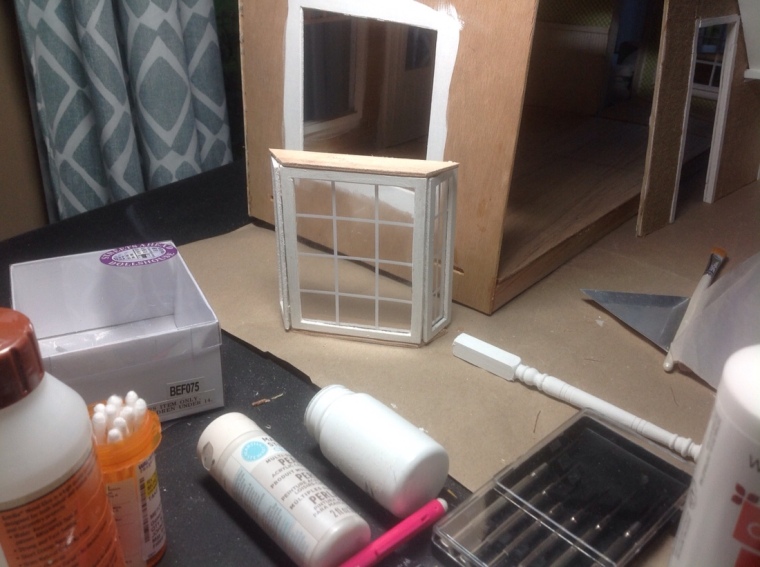 That’s it so far – off to church in a little while, then back to work this afternoon.